I'm super happy to announce that Snippet Pixie 1.1 has been released. 🎉

Snippet Pixie is a great way to build a library of time and keystroke saving short text abbreviations that automatically expand while you type, but up until this release you could only add snippets to your second machine by either manually adding them again or finding and copying the settings database.

When using the import feature Snippet Pixie by default will not overwrite existing snippets with the same abbreviation, but you can optionally do that if you've made changes to the abbreviations on one installation and want to apply them to another.

For safety, the import feature also does not delete any existing snippets.

The welcome screen in Snippet Pixie now includes an Import Snippets option to get new installations up and running quickly. If you've already got some snippets in Snippet Pixie then you can use the "Import snippets..." option from the cog menu.

The cog menu is where you'll find the "Export snippets..." option too, it's enabled if you have some snippets to export.

Want to script an automatic backup or import? Snippet Pixie has your back as it also has new command line options for export and import.

Some people might be wondering why I picked JSON as the file format. The primary reason is flexability and general support for the format. There are something like eleventy million utilities for handling JSON, so if you want to manipulate or generate your own file of snippets you'll be able to do it easily.

I'll document the format properly at some point, but it's very simple as this vastly trimmed down export of some of my snippets shows...

The generator and version elements are very important, Snippet Pixie will not currently import a file that doesn't have those two elements with those same values as they signify a format that it understands.

The data array contains a list of data types with data that can be imported, currently there's only snippets.

Each of the objects in the snippets array contains only an abbreviation and body, on export they are ordered alphabetically by the abbreviation and if there are duplicates (it's possible) then by a hidden id which typically means by order of addition unless entries have been renamed. Due to this ordering, if overwriting duplicates on import is allowed then last duplicate in the file will "win", but by default first entry will "win" if the abbreviation does not exist in Snippet Pixie's library already.

As you can see from the example, it's UTF-8 and supports emoji and new lines (those \n bits), and characters like \ are escaped etc.

As always, you can get Snippet Pixie from the elementary AppCenter.

Hope you like it, if you have any feature requests or problems with Snippet Pixie, please stop by the GitHub repository and share your thoughts! 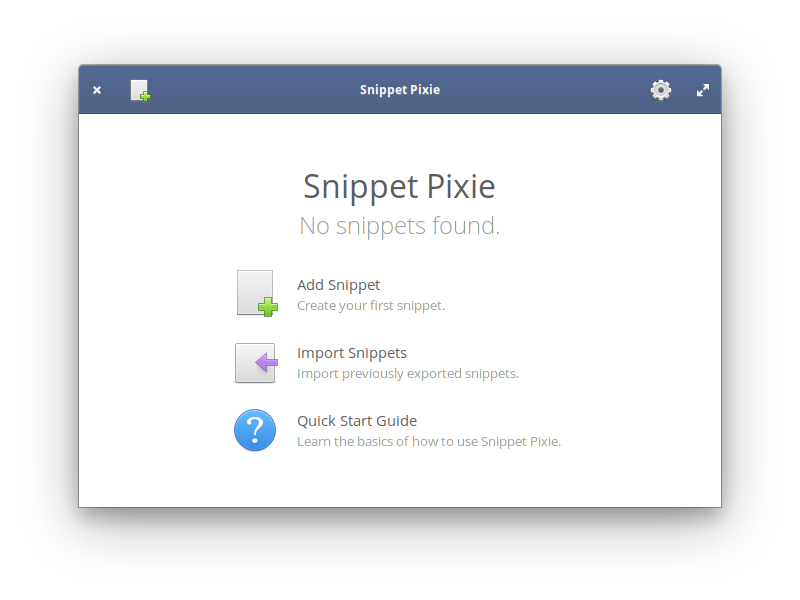